I. A struggle through hardships -- historical evolution with the transmission of academic and clinical achievements 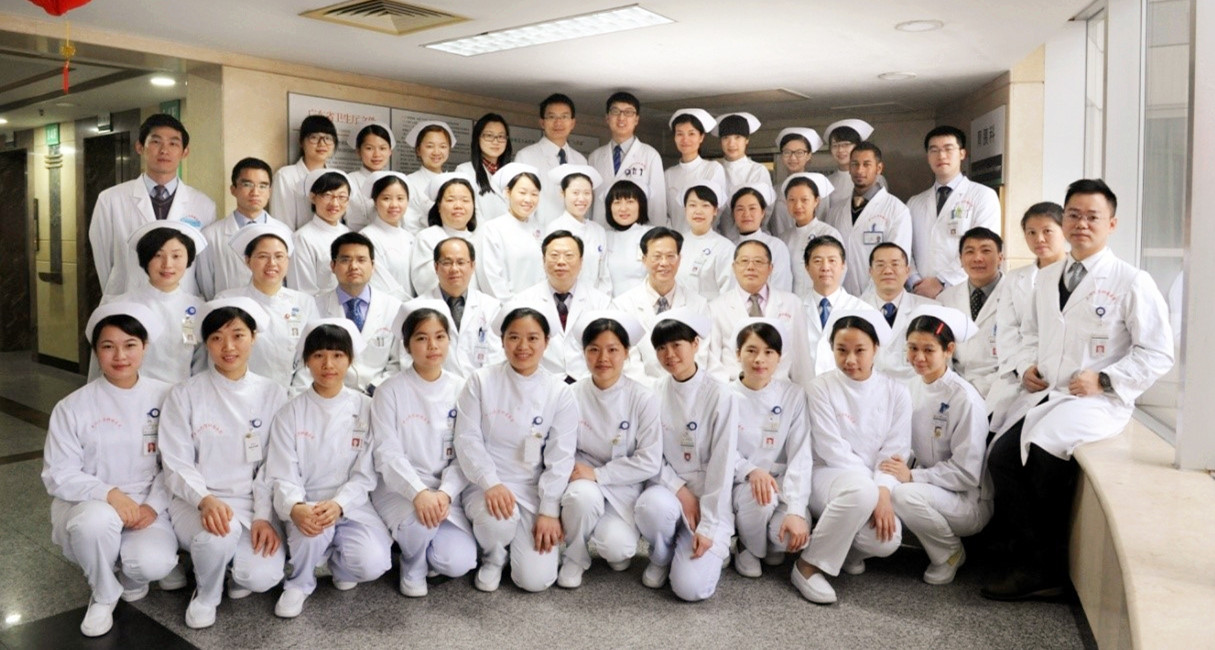 The specialties advances in development; while the historical lineage leads to accumulations of experience. In 2009, to further strengthen the power of the specialties, Department of Gastric and Pancreatic Surgery came into existence to keep up with the times as one of the currently youngest departments at Cancer Center. Zhou Zhiwei serves as the Chief for Department of Gastric and Pancreatic Surgery; Li Wei is the associate chief; Sun Xiaowei is the Secretary and Yuan Xiuhong is the Service director. Among the 14 doctors at present, 3 are chief physicians, 4 are associate chief physicians and 3 are attending physicians. Among the 29 nurses, 1 is Associate chief nurse practitioner and 3 are nurses-in-charge. There is one technician in Prof. Zhou Zhiwei’s laboratory.


As a nationwide renowned research center of gastric and pancreatic specialty integrated with medical treatment, scientific research and teaching, the Department of Gastric and Pancreatic Surgery assumes the front-line clinical and research work on gastric carcinoma, single disease of pancreatic cancer, melanoma and soft tissue neoplasm; meanwhile it is the chairman unit of the Guangdong Provincial Anticancer Association Gastric Carcinoma Committee. The Department of Gastric and Pancreatic Surgery has been developing flourishingly at high speed with remarkable achievements within five years.

II. Taking the lead bravely to be the top -- constant improvement of medical treatment

Over the past five years, the Department of Gastric and Pancreatic Surgery has adhered to its principle of medical treatment, “caring patients, developing techniques fundamentally and featuring individualized treatment”. It has enhanced the hardware construction and kept optimizing the internal management to further its development with high quality. It has vigorously applied the new techniques to clinical purposes and striven to build a developmental medical team. It has dramatically raised the five-year survival rate and life quality of gastric carcinoma patients by successively performing the cutting-edge techniques such as the stomach-neoplasm therapy combined with laparoscopy and endoscopy, intraperitoneal hyperthermic perfusion chemotherapy, the digestive tract reconstruction after radical proximal gastrectomy for gastric carcinoma (functional jejunal interposition reconstruction) and laparoscopic splenic hilar lymph node dissection. In terms of comprehensive treatment, the Department is in the leading level nationwide. It has particularly explored and thus acquired plentiful experience in the postoperative adjuvant therapy, perioperative chemotherapy and perioperative chemoradiotherapy, laying a solid foundation for upgrading the overall prognosis of gastric carcinoma patients.

The Department assumes the task to cultivate undergraduates and foreign students through specialty internship, teaches and trains undergraduates, postgraduates and visiting students. Right now, one doctoral advisor and 4 advisors of master’s degree student serve in the Department. Altogether 18 master’s degree students and 11 Ph.D. students, including 2 international students, have been admitted during the five years since the establishment of the Department.

In 2008, the Department initiated to organize the medical continuing education program “the standardized treatment class for advanced gastric carcinoma”. One year later, it ascended as the state medical continuing education program. So far, six sessions of the class have been successfully held and attended by medical peers in the gastric carcinoma field across the country. Through the five years, Prof. Zhan Youqing and Prof. Zhou Zhiwei has upheld the spirit of “being practical and innovative to serve the clinical purposes” and endeavored to provide a learning and exchange platform with distinct features and strong practicality. The increasingly improved quality and expanded scale of the class attracted over 400 participants merely in the sixth session in 2013, which contributed a great deal to the popularization of standardized gastric carcinoma treatment in China.

Since 2012, the Department has organized the “training class of new techniques and ideas for gastric carcinoma surgical treatment” once a quarter of the year. 5 to 8 participants are enrolled from different hospitals throughout China in each session. Visual operation observation, postoperative discussion and specialty-based teaching are designed to actualize the standardization of gastric carcinoma operations; new techniques, ideas and equipment are incorporated to lift the level and curative effects of gastric carcinoma operations. Until now, seven sessions of the training class have been completed and nearly 50 participants have been well trained.

To keep the theoretical teaching updated, Prof. Zhou Zhiwei specially arranged excellent teachers to revise certain chapters of the textbook -- Clinical Oncology. In addition, the Department has compiled the following works: Health Education on Cancer Prevention in Communities (edited by Zhou Zhiwei), Stoma Therapy and Rehabilitation -- Theory and Practice (edited by Zhou Zhiwei) and Melanoma -- Basis and Clinical (edited by Chen Yingbo). The Department has involved in the editing of the following books: Principles of Personalized Medicine, Gastric Cancer (Peking University Medical Press) and International Comparative Study on the Scientific and Technological Innovation Ability of Chinese Modern Medicine. Gastric Cancer, the professional journal of gastric cancer single disease sponsored by the Department, has been regularly published to present the latest researches on and hot issues about gastric cancer. 800 to 1000 copies are printed for each issue to be sent for free to experts and medical peers in the gastric cancer field across China. The latest Issue 9 has been published. Moreover, the professional website of gastric cancer was launched by the Department in 2009 to popularize the knowledge of gastric cancer and create a proper platform for facilitating the exchange among medical personnel and between medical personnel and patients.

For a young department, teaching is both the basic task to undertake and the essential basis for vigorous development. Since the construction of the Department, Zhou Zhiwei, Chief for Department, has naturally regarded teaching as one of its focuses and development directions and spared no efforts to cultivate the educational awareness and teaching ability of the Department members. All the efforts paid off. Each member has become more enthusiastic about education and more capable to teach. In the annual teaching competition for youth teachers at Sun Yat-sen University Cancer Center, Yuan Shuqiang, the attending physician, and Qiu Haibo, the physician, won the third prize of the English group in 2011 and 2013 respectively. In 2014, Prof. Zhou Zhiwei won the title of SYSU Excellent Medical Manager of Clinical Work and Teaching. Such a title highly praised the individual dedication of Prof. Zhou Zhiwei to the medical profession and education for 30 years and acknowledged the outstanding contribution of the Department to teaching in recent years.

IV. Looking ahead based on the present advantages -- scientific research principles which keep pace with the times

By Sticking to the overall idea of clinical scientific research “top-level design, resource integration, advantage highlight, comprehensive promotion”, the Department has formed a sturdy research basis and rigorous scientific research tradition, trained an academic team with the reasonable echelon structure and substantial comprehensive strength, centered on stable research interest and exerted tremendous academic influence on the whole nation. It has presided over 20 programs supported by scientific research foundation, including 8 programs of state foundation and 10 programs of provincial and ministerial foundations. It has published over 50 papers on domestic and foreign journals, including more than 40 SCI papers respectively on such well-known oncology journals as Stem Cells, Annals of Surgery, PLOS ONE and Annals of Oncology.

The progress of scientific research requires a large amount of historical data and cases. Therefore, the Department has attached utmost importance to the construction of basic database for scientific research. The operation data base, specimen database, serum bank, cell bank and so on have been soundly constructed during recent years. The gastric cancer database collects detailed data of nearly 4,500 gastric cancer cases performed since 1964. The operation imaging database, started in 2013, has taken shape so far.

The year 2012 witnessed the establishment of the research group laboratory under the instruction of Prof. Zhou Zhiwei in the Department of Gastric and Pancreatic Surgery. In 2013, the Cancer Center specially invited Prof. Liang Chun from Hong Kong University of Science and Technology to be the guest professor to practice the reform idea of scientific research “walking out and inviting in” and to boost the efficient integration of clinical work & scientific research as well as the discipline construction. The team of Prof. Liang Chun and the research group of Prof. Zhou Zhiwei will cooperate closely and strive for mutual progress in the aspects of scientific research, talent cultivation and especially the application of gastric cancer clinical accomplishments and international exchange.

At the moment, the Department takes the lead to undertake a multitude of multi-center clinical researches, including Sun Yat-Sen University Clinical Research 5010 Program “A Randomized Controlled Study of Preoperative Chemoradiotherapy Combined with Operation & Adjuvant Chemotherapy and Preoperative Chemotherapy Combined with Operation & Adjuvant Chemotherapy for Advanced Gastric Cancer Treatment”, “A Randomized, Controlled, Multi-Center, Open Phase III Clinical Research on S-1 Combined with Oxaliplatin and S-1 Single Drug for Adjuvant Chemotherapy of Advanced Gastric Cancer Patients after D2 Radical Gastrectomy”, and “A Clinical Research on Neoadjuvant Therapy with Trastuzumab Combined with XELOX for HER2-neu Positive Gastric/Gastroesophageal Junction Adenocarcinoma”. Apart from these, the Department, as the important experimental base of gastric cancer single disease in South China, has participated in many multi-center clinical researches, including the 11th Five-Year National Science & Technology Supporting Program “A Randomized, Controlled, Multi-Center, Phase II Research on Oxaliplatin Combined with Fluorouracil and Leucovorin Two-Week Plan (mFOLFOX7) for Advanced Gastric Cancer Perioperative Chemotherapy” and Classic research, which by a large margin increases the academic level and international influence of the Cancer Center in terms of gastric cancer clinical trials.

V. Being all-inclusive while following the best -- talent cultivation and trans-national exchange unified with the international level

The Department has practiced the idea to cultivate talents by teaching students in accordance with their aptitude and letting them give full play to their respective talents. Under the leadership of Chief for Department, the Department members have been provided with spacious room for development and granted with numerous chances to share resources. Xu Dazhi, associate chief physician, and Wang Wei, attending physician, won the first and the third batch of funds respectively supported by the Youth Talent Training Program of Sun Yat-sen University Cancer Center.

In order to reinforce the influence of the Department and master the cutting-edge techniques and ideas, the Department has organized a variety of academic seminars on an irregular basis to invite domestic and foreign well-known specialists in gastric cancer and pancreatic cancer for exchange. The Department has also performed friendly academic exchange and close scientific research cooperation with such prestigious medical universities as Harvard Medical School - Harvard University and Hong Kong University of Science and Technology to be unified with the international academic level.

Initiated and organized by the Department, the Guangdong Provincial Anticancer Association Gastric Carcinoma Committee was founded on November 20, 2009. Prof. Zhan Youqing served as Chairman of the first Committee. As the chairman unit of the Guangdong Provincial Anticancer Gastric Carcinoma Committee, the Department prepares and hosts the Guangdong Province Gastric Carcinoma Academic Symposium once a year to invite notable gastric cancer experts in mainland China to come and teach and specially invite gastric cancer experts and scholars from the United States, Japan, South Korea and Taiwan to come and exchange. To date, five sessions of the symposium has been hosted and it has risen to be the honorary platform for medical specialists to impart professional knowledge and the supreme platform for medical peers to exchange academically. As such, it has laid the substantial foundation for popularizing the professional-consensus-based gastric cancer standardized diagnosis & treatment as well as promoting the profound clinical application of the scientific research accomplishments.

“The song of time resounds in waves; the game of career renews in rounds”. In the next five years, we are sure to inherit the excellent traditions, keep pace with the times, pioneer our work with innovation and advance forward against adversities so as to actualize the grand vision of “being the leading nationwide and the first-class worldwide” and upgrade the level of gastric cancer prevention and treatment in China and realize the China dream of public health.